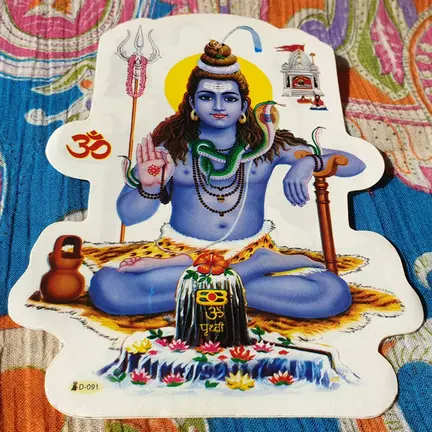 13,5x10 cm
Shiva, the destroyer, part of the Trimurti, the trinity with Brahma and Vishnu. The supremes who creates, protects and transforms the universe.

Unfortunately, the item cannot be purchased, as there are no more in stock
Dimensions: 135 cm × 100 cm

Shiva is depicted as an Yogi living an ascetic life on Mount Kailash with Parvati and their two sons Ganesha and Kartikeya.

Shiva is often portraied with a serpent around his neck, a string of Rudraksha beads, the adorning crescent moon, the holy river Ganga flowing from hair, the third eye on his forehead, the trishula or trident as his weapon, and a two headed drum. His body is covered in ashes, reminding that material existence is impermanent. He is usually worshipped in the aniconic form of lingam.
The bull Nandi serves as the vehicle (Sanskrit: vāhana) of Shiva.
The Gaṇas are attendants of Shiva and live in Kailash. They are often referred to as the bhutaganas, ghostly hosts or gang of Shiva. His son Ganesha was chosen as their leader.
Five is a sacred number for Shiva. Shiva's body is said to consist of five mantras, called the pañcabrahmans.